Need something good to read?

Here are the books I have edited, and they were self published by their authors.

On a Red Horse by Monica Corwin

Book 1 in the Revelations Series

Scarlet needs a new job, but Horseman of the Apocalypse doesn’t sound good on a resume. Three years ago she followed her companions to Earth in an effort to live human lives. But the moment she left her husband Tyr she knew life wouldn’t be worth living. Lonely and longing for her husband, Scarlet is on a path of destruction that could endanger all the riders.

Tyr, god of justice, hunts his wife across the realms. From Hell to the Golden Throne, he travels until he finds her working as a phone operator. Scarlet is no longer the woman he fell in love with, and he is determined to bring that woman back to him if it takes the rest of eternity.

Even though the Horsemen live on Earth, they are still responsible for guarding four seals that can unleash the Apocalypse. When a prophecy is awoken by a deity who only has her own interests at heart, they must go on the defensive to keep their homes on Earth and protect the seals. If even one seal opens, it will start a chain reaction that will force the Horsemen to take up their mantles and destroy the new lives they’ve worked so hard to build.

Keep a journal of your wildest fantasies, but remember the two rules: The fantasies have to involve your spouse, and no reading your spouse’s journal. When the marriage therapist recommends this treatment to Hannah and Jason, they doubt the journal’s ability to fix Hannah’s loneliness or Jason’s stress. But as the pages fill with whispered desires, they find themselves wanting each other in ways they’d only ever imagined. 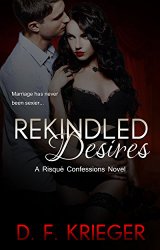 Write in a sex journal to save their marriage? Chris and Tabby don’t believe for a moment it’ll work, but they give it a shot at the urging of their friends. The problem is, what does a journal have to do with Tabby’s frustration over running a household and raising kids by herself? Or Chris feeling like his wife has no room left in her life for him? Even as they express their doubts, they follow the guidance of marriage therapist Callie in hopes of saving their marriage. Are their efforts too little too late, or will they be consumed by their rekindled desires?

Lust, gluttony, greed, sloth, wrath, envy and pride. The Cynfell Brothers are the very embodiment of a sinful existence. But could the right woman change that?

Being the mistress of one of the most notorious rakes in London was never going to be easy, but Josephine believed she was strong enough. After all, she loved Dante Cynfell to distraction. He provided her with a comfortable home and all the art supplies she could ever need. After a short marriage that left her near destitute, the widow couldn’t help but fall into his arms…and his bed.

But after four years of tolerating his drunken behaviour and late night calls, Josephine has had enough. Her paintings have caught the eye of a great patron of the arts. With promises of fame and fortune ringing in her ears, she realises being a mistress simply will not satisfy her anymore. She wants true love, marriage, and respectability.

When Josephine ends their arrangement, Dante is shocked. She had a comfortable home, his adoration…hell, even his faithfulness. What more could a beautiful woman want?
Marriage? Well, that’s one thing Dante Cynfell doesn’t plan to offer any woman—not even Josephine. He’s witnessed too many miserable marriages. Why put the person you care about through such misery?

Positive he can win her back, he sets out to remind her how good they are together. One thing is for sure, Dante will not give her up easily—especially to another man. Josephine is about to learn that an envious Cynfell man is not to be trifled with. 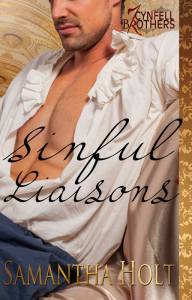 Lust, gluttony, greed, sloth, wrath, envy and pride. The Cynfell brothers are the very embodiment of a sinful existence. But could the right woman change that?

Lord Pierce Cynfell is in a world of trouble. With his brother threatening to cut him off and his gambling debts increasing, his beautiful rescuer couldn’t have come at a better time. He can’t help but be attracted to the worldly, mature woman.

So he certainly isn’t going to say no when she offers to write off his debts in return for one thing—his body.

However, it soon becomes clear more than his body is becoming involved. While everyone else might think he’s only there for the money, the beautiful widow slowly draws him deeper until he wants to unlock every secret buried beneath those tight corsets.

Evelyn might let Pierce beneath her corsets but she’s determined it will be no more than that. She has loved and lost twice in her life and won’t let that happen again. Meanwhile, she has too many other things to worry about—like the preservation of her son’s land.

When Pierce begins to show himself as more than a skilled lover, Evelyn has a choice—let herself be vulnerable again or send away the man who lights a fire in her body, heart and soul.