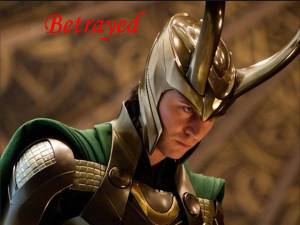 “The saddest thing about betrayal is that it never comes from your enemies.”  ~ Horus Fe-Nix

There comes a moment in every man’s story that defines them. For Loki, that moment was when he realized that his entire life, all his expectations for his future had been based on a lie.

To him this was a betrayal. He believed he knew who he was and what his role was in the future of Asgard. The venomous words Odin spoke in the first Thor film must have felt like a killing blow to everything Loki had been taught to believe about himself. He had to reconstruct his identity from the ashes of the life he had known.

That moment, that betrayal, cemented a resolve inside of him that led him down the path of the villain, but Loki still retained elements of the Anti Hero deep inside himself.

What do you think?  Had Loki not been betrayed by those closest to him, would he have chosen the path he did?